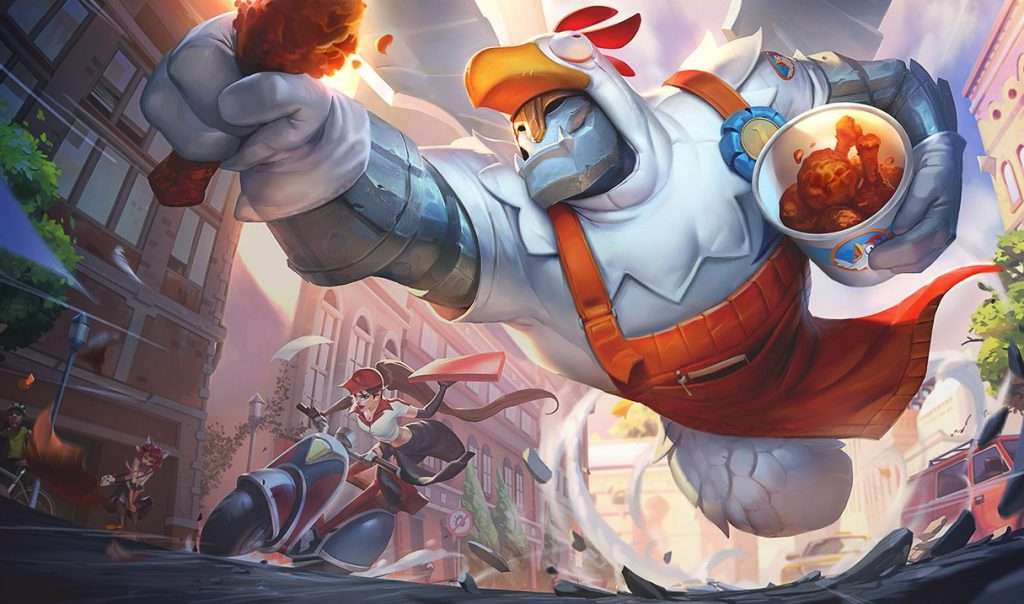 Galio is the silent guardian of the gleaming city of Demacia, famously known as the stone colossus that keeps vigilant watch over its citizens.

This champion was built by Durand as a bulwark against enemy mages, often standing motionless for decades until a powerful magic force stirs him to life—again.

When activated, Galio usually spends most of his time in Demacia, savoring the thrills of dight and the honor of defending the citizens.

However, his triumphs are often bittersweet as the magic he destroys is the very source of his reanimation, with each victory leaving him dormant once again.

Now, Galio waits to live again to bring honor to Demacia and its people, serving his true purpose.

Galio results from the infamous sculptor Durand’s commission to create a patricide shield for the military and is his greatest masterpiece.

Although not many had high expectations, the winged statue of Galio had become a vital contributor to the defense of the Kingdom of Demacia, serving as a symbol of the nation across Valoran.

Galio can move and speak entirely on his own through the power of absorbed magic, giving him life. He diligently fought for the Demacians, shielding them from one attack to another.

However, once he defeats his opponents and the magic perishes, Galio once becomes a mere immobile golem watching over the nation of Demacia.

But even while immobile, Galio had his consciousness, where he often longed to experience the sensations of battle once again. Supporters across Demacia would show their gratitude by offering gifts to his statue now and then.

However, a year went by, Galio had the sorrowful realization that, unlike him, the people of Demacia were mortals. There, he understood how badly the Demacia people needed his protection.

Fighting had been Galio’s passion, but now, the people were his purpose. Galio’s greatest hope is to be blessed by infinite magic so that he’ll never be forced to sleep again.

Only then will he be able to serve his purpose—standing and fighting as Demacia’s protector to the end of time.

Galio, as a mid-lane champion, is super strong thanks to his enhanced gank pressure, wave clear, and roaming pressure with a potent ultimate. He’s also highly durable, making him a great mid-lane or tank.

Here’s a closer look at Galio’s skills and abilities:

This passive skill gradually Galio’s next basic attack to have an non cancelable windup, modified to inflict 15 to 200 magic damage to target enemies and those around them.

When activated, Galio will create two windblasts up to 250 units on both sides that arc out before converging to the target direction. The skill will then deal magic damage to all enemy units passing through.

When these two windblasts meet, the gusts from a tornado persisting for 2 seconds will slowly move forward, inflicting bonus magic damage to all enemies in the area every 0.5 seconds.

Active: Galio will charge up for up to 3 seconds, slowing himself down by 15% and gaining magic and physical damage reduction. Charging will increase Shield of Durand’s damage, taunt, and radius for 2 seconds.

You can recast Shield of Durand at any time at that duration. If Galio completes charging or gets interrupted, he’ll automatically initiate the recast.

When you recast Shield of Durand, Galio will refresh the damage reduction for 2 seconds while dealing magic damage to nearby enemy champions while taunting them.

Justice Punch lets Galio step backward in the opposite direction and dashes to the target location until colliding with an enemy champion. During this, Galio will deal additional magic damage to all enemies in the path.

This active attack lets Galio designate the target allied champions’ location during casting as his landing spot. It also resets Shield of Durand’s passive magic shield for himself, granting it to all allied champions nearby for 5 seconds.

After channeling Hero’s Entrance for 1.25 seconds, Galio gains crowd control immunity for the remaining duration, letting him become immune to getting targeted.

Once the immunity duration passes, Galio will deal magic damage to all nearby enemies on impact, knocking them back 100 units over 0.75 seconds.

Galio is one of the common mid-lane choices for League of Legends and is considered a decent pick. However, he’s a moderately challenging champion to play in the game.

Here are a few tips and tricks to help you master Galio’s playstyle in no time: