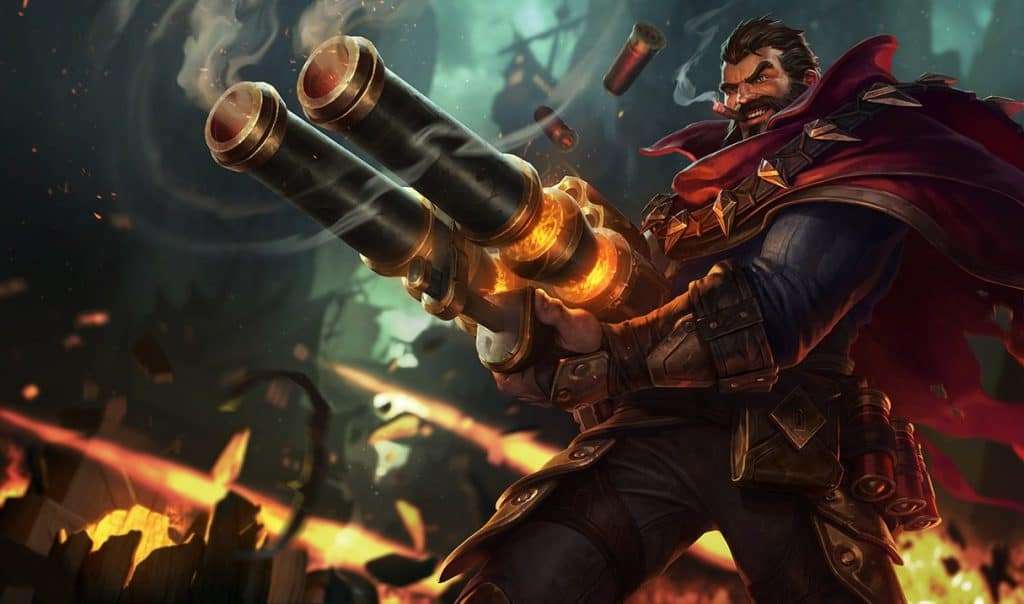 Graves, full name Malcolm Graves, is one of the best mercenaries in Bilgewater, the infamous port city. However, he’s also a gambler and thief.

Graves has become a wanted man in most cities and entire empires he has visited. However, despite having an explosive temper, Graves has a strict sense of criminal honor.

He worked alongside Twisted Fate, which, unfortunately, betrayed him after years of working together. However, Graves eventually forgave his previous partner.

Now, Graves decided to reconcile his partnership with Twisted Fate and prosper once more in the turmoil of Bilgewater’s criminal underbelly.

Malcolm Graves has become a renowned mercenary, gambler, and thief, earning him the nickname of the “wanted man” in vast cities and empires he has visited.

Graves was raised in the alleys of Bilgewater’s ports, where he quickly learned how to survive—by stealing mostly. He’s become better at what he does years later.

However, as years went by, Graves met the trickster known as Twisted Fate, where he developed a close bond. When you combine their unique skills, they are an unstoppable pair.

But luck ran out, and during a heist gone wrong, Twisted Fate betrayed and abandoned his partner—imprisoning Graves in the infamous prison known as the Locker.

Graves eventually crawled his way into freedom and started pursuing his old-time partner. He’s a man whose treachery consigned him to a decade of unspeakable misery.

However, Graves and Twisted Fate managed to find themselves in his debt during his slow climb to the top. The older pair decided to pick up where they left off.

Graves boasts high health, top speed, massive late-game damage, and jungle—skirmishing with his passive armor. He has many base stat buffers, making him an excellent scaling Jungler.

New Destiny: Double Barrel: When using the Double Barrel, Graves’s primary attacks will consume ammunition for two shells. He’ll then reload over a couple of seconds after expending all bullets.

Buckshot: For this attack, pellets will collide into the first enemy unit or structure they hit. Each round will apply on-hit effects toward enemy forces.

End of the Line: This ability is where Graves will fire one round in a target location, dealing physical damage to all enemies hit by it—leaving a powder trail behind.

After a total duration of 2 seconds of 0.25 seconds after colliding with terrain, End of the Line’s round will detonate. When it explodes, it’ll deal more damage to enemy units.

Smoke Screen: When activated, Smoke Screen lets Graves fire a smoke canister in a target direction. Upon impact, Smoke Screen deals magic damage to an enemy within the area while slowing them down by 50%.

The Smoke Screen canisters exude a cloud of smoke for 4 seconds, applying near sight of outside the area to all enemy units. Plus, all enemies slow down every 0.25 seconds while reducing their sight radius.

Quick Draw: Active: Graves will dash to a target direction while resetting his primary attack timer, reloading one bullet to gain a stack of True Grit for a few seconds. Graves can stack up True Grit 8 times.

Additionally, for every pellet that hits an enemy, Quickdraw’s cooldown gets reduced by 0.5 seconds.

True Grit: When you gain enough stacks of True Grit, it’ll grant Graves bonus armor. Plus, subsequent casts of Quickdraw and out-attacks against non-minions refresh the duration of True Grit.

Collateral Damage: When activated, Collateral Damage causes Graves to fire explosive shells in a target direction. This attack deals physical damage to all enemies hit while recoiling in the opposite direction.

When Collateral Damage hits an enemy champion or reaches the “end” of its range, the shell will explode and inflict an additional 80% bonus damage.

Graves is one of the most challenging champions in League of Legends to master because of his “shotgun” mechanic. It’s where his auto-attacks resemble those of a shotgun.

Because of that, Graves boasts a significant amount of unusual mechanics and tricks that make him incredibly powerful yet complex.

Here are a few tips and tricks to help you get used to Grave’s tricky playstyle: