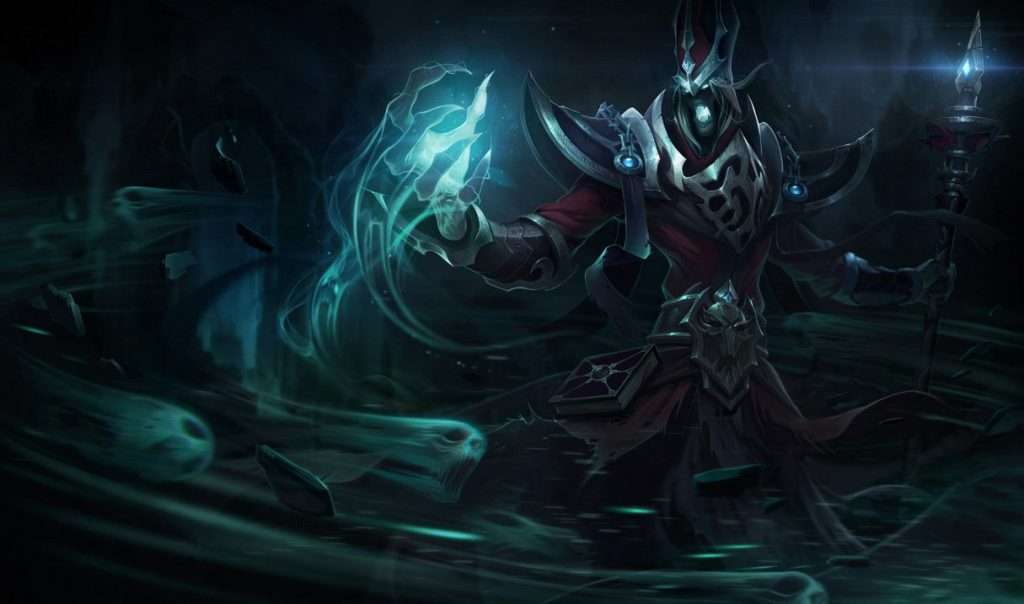 Karthus, the harbinger of oblivion, is a famous apparition whose chilling songs serve as a prelude to his horrific appearance. He was once a mortal with an unusual obsession with death.

Although the living usually fears the eternity of undeath, this powerful mage only sees the beauty in it, embracing its purity—and celebrating the perfect union between life and death.

When the Deathsinger emerges from the Shadow Isles, it gives joy and peace of death to mortals—making an apostle of the unliving.

Karthus is a mythic creature who lived as a mortal once, with an unusual obsession—death. He eagerly embraced the gift of undeath, and now, as a lich, he’s never been closer to his beloved grave than ever before.

Karthus commands magic using the “oblivion,” seeking to bring his grim truth to the rest of the world—only death can bring one clarity and purpose.

As his obsession grew, the further he delved into the concept of death and became fascinated by the legends of the Shadow Isles. Possessed by these legends, Karthus knew he had to discover if they were true.

There, Karthus began his journey to the dreaded Shadow Isle, surrounded by mists and the surreal beauty of the place—making him feel like he was finally home.

However, during that day, something has awoken in Karthus, as he did something no one had ever dared to, he willingly gave up his life to undeath.

Now, as he reenters the world, Karthus has become the very embodiment of his obsession: an undying lich holding the balance between life and death.

Karthus is a potent and persistent solo lane mage. You can whittle your foes with Karthus’s Lay Waste and use clever positioning and timing to deal additional damage to your enemies.

He’s an overall great long-ranged mage. However, he can be challenging to use. Despite that, he’s one of the top picks in the Jungle role for League of Legends, making him an A-Tier Rank.

Here’s a closer look at Karthus’s skills and abilities:

Plus, Karthus becomes untargetable and immune to crowd control, preventing him from receiving any incoming damage for the duration while allowing to cast abilities at zero cost.

If Karthus learns the Defile skill, it’ll remain toggled for the rest of Death Defied’s duration.

Lay Waste: When casting Lay Waste, Karthus launches a blast at a target direction, detonating after a short delay, granting sight of the location before inflicting magic damage to all enemy units caught.

The attack can affect all nearby enemies even when you only hit one target.

Wall of Pain: This active ability lets Karthus summon a passable wall of spectral energy at a target direction perpendicular to his facing for five seconds, granting brief sight around the location’s pillars and centers.

Enemy units passing through the Wall of Pain for the first time from the same cast will get slowed down for four seconds and reduce their magic resistance by 15% for four seconds.

Toggle: Karthus inflicts magic damage to surrounding enemy units every 0.25 seconds, and toggling it off can deal one tick’s worth of damage.

You can’t toggle Defile while Death Defied is in effect, but you can use it while channeling Requiem.

Requiem: When activated, Karthus will channel for three seconds then inflict magic damage to all targetable enemy champions after the duration ends.

Karthus is one of the best champions for team fights in League of Legends, boasting a high damage AoE ability.

Karthus has several strengths, and his Jungle cleaning is one of the best and quickest in the game. However, since he doesn’t have any escape or control spells, be wary of enemy Junglers or laners that disappear from their lanes.

Here are a few tips and tricks to help you master Karthus’s unique playstyle:

Read about AMUMU next!