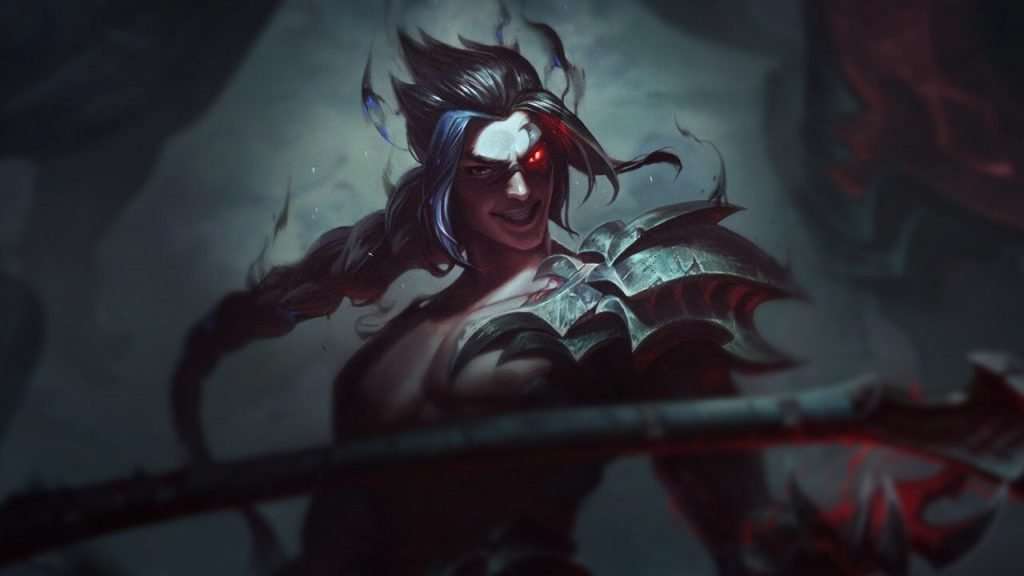 Kayn is a practitioner of shadow magic, battling to reach his destiny of bringing the Order of the Shadow into Ionian supremacy.

He wields a sentient “Darkin” weapon, called Rhaast, undeterred by the weapon’s creeping corruption of his body and mind. During each game, either Kayn or Rhaast will consume the other.

Kayn lives to hone his shadow skills by hunting ranged champions, while Rhaast fuels his bloodlust by facing melee enemies.

If Kayn wins, he ascends to become the shadow assassin. Meanwhile, if Rhaast wins, the Darkin will consume his host—and take center stage.

Kayn is one of the few full-slayer Junglers in League of Legends and can take both playstyles of slayers, making him unique.

He can be either a full-on assassin or skirmisher. It depends on which form he takes. As a shadow assassin, Kayn can deal heavy burst damage while staying swift.

Kayn is an insatiable nightmare and a multi-class champion that can be challenging to master. He’s the only champion in League of Legends who can change his class while in the middle of a game.

The Darkin Scythe: Kayn uses an ancient weapon, fighting Rhaast, the “Darkin” within it, for control. It can heal Kayn for a percentage of spell damage inflicted to enemy champions.

Shadow Assassin: In this form, Kayn, for the first few seconds in combat with an enemy champion, will deal bonus damage.

Reaping Slash: When using Reaping Slash, Kayn will dash in a target direction, inflicting physical damage to enemy units he passes through before swinging his scythe.

When he swings his weapon, Kayn will deal the same damage to nearby enemies. Additionally, both instances of Reaping Slash will inflict 40 bonus damage against enemy monsters and minions.

Blade’s Reach: When using this skill, Kayn will perform an upward sweep using his scythe in a target direction, inflicting physical damage to all nearby enemies in a line. Plus, it can slow them down by 90% up to 1.5 seconds.

Shadow Assassin: When in this form, Blade’s Reach range is increased up to 200 units. Plus, Kayn will conjure a non-targetable living shadow at the casting position to perform its sweep over 0.55 seconds.

When activated, Kayn will gain 40% bonus movement speed, ghosting, and ignore terrain collisions for 1.5 seconds if he was in combat with an enemy champion within the last 3 seconds.

Additionally, the effect can’t remain active out of terrain for longer than 1.5 seconds and will instantly cancel if Kayn performs a basic attack.

Shadow Assassin:  In this form, Shadow Step’s cooldown will be reduced to 8 seconds regardless of Kayn’s rank. Additionally, he’ll gain 100% slow resistance and, when entering terrain, an 80% bonus movement speed increase.

Active: Casting Umbral Trespass lets Kayn vanish and dash to a marked enemy champion. When arriving, he’ll channel up to 2.5 seconds, attaching to the target—and revealing them.

You can recast Umbral Trespass after a 0.75-second delay, allowing Kayn to heal physical damage to the target unit and dashes out from their body in a target direction. All these, while he’s non-targetable.

Shadow Assassin: When in this form, Kayn’s Umbral Trespass gains up to 200 bonus cast range and “emerge” damage. Plus, emerging will reset Kayn’s Darkin Scythe’s cooldown.

Kayn is one of the best assassins in League of Legends, offering his whole new set of abilities to the Jungle and tricks no one has seen ever before. He’s the game’s first-ever multi-class champion.

Kayn can transform into a deadly assassin to pick off “squishes” and a bruiser to go against tanks. He offers a new dimension of flexibility.

Here are a few tips and tricks to help you master Kayn’s tricky playstyle.

Read about AURELION SOL next!