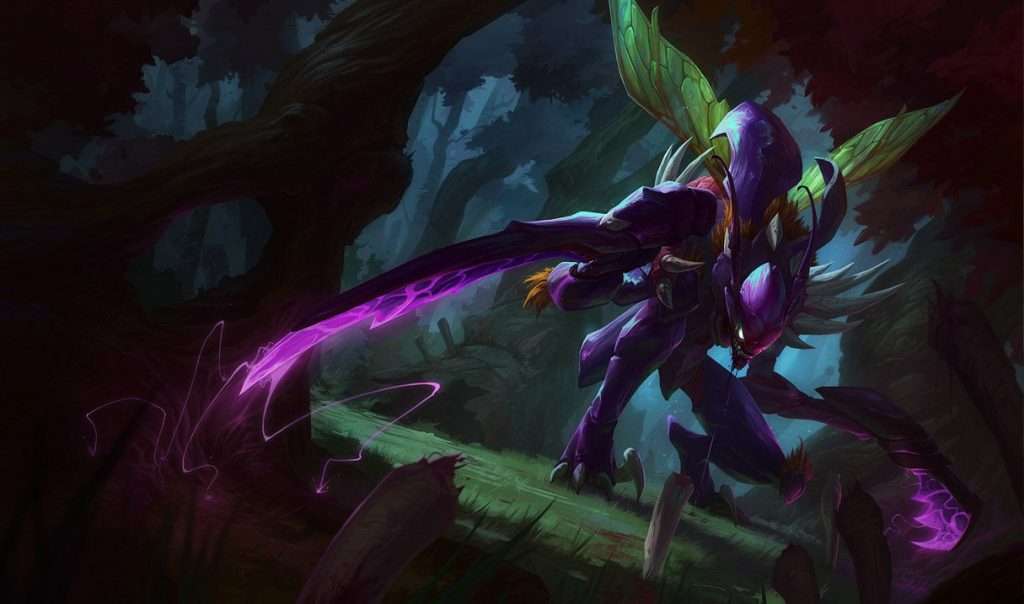 As the Void grows and adapts—none of its spawnlings are more apparent and potent than Kha’zix, the Voidreaver.

Evolution drives the core of Kha’zix, born to survive, adapt, and stay strong. Where Kha’zix struggles to do so, he grows new and more efficient ways to counter and kill his prey.

Initially, Kha’zix was merely a mindless beast. However, his intelligence has developed as much as his form.

Now, Kha’zix plans out his hunts and uses the visceral terror he engenders in his victims.

Kha’zix is a lethal Void predator who infiltrated Valoran to devour its most promisingly valuable creatures. With each kill, Kha’zix gains the strength of his prey, allowing him to evolve and become more powerful.

Kha’zix hungers most to conquer and consume the places he visits.

When Kha’Zix crossed over into the “real” world, he was fragile and ravenous—and only hunted smaller and weaker prey. However, now he focuses his hunger on the deadliest creatures, risking his life to satiate his need.

Kha’Zix soon hunted with unrestrained aggression, firmly believing he was unstoppable, which he was until he met Rengar, a ferocious Vastayan trophy hunter.

After coming into a stalemate, Kha’zix burned with anticipation at the thought of devouring the entity who can keep up with the Void’s strength. Now, Kha’zix is on the search for the powerful prey he encountered with renewed vigor.

Kha’zix is a dangerous void predator continuously seeking power through feasting on his foes—and evolving. He absorbs the strengths of those he devours, transforming into an even more dangerous entity.

Let’s take a closer look at Kha’zix’s skills and abilities:

This passive skill causes Kha’zix’s next basic attack against enemy champions to deal an additional 14 to 116 magic damage and slow them down by 25% for 2 seconds.

Kha’zix will gain the Unseen Threat skill whenever the enemy loses sight of him or whenever Void Assault is in effect.

Passive: This passive ability lets Kha’zix automatically consider any enemy that doesn’t have allies near as isolated.

Active: When casting Taste Their Fear, Kha’zix will slash a target enemy, inflicting physical damage, which is increased up to 110% on isolated target units.

Evolved Reaper Claws: This passive skill lets Kha’zix gain 50 bonus range on his auto-attacks and Taste Their Fear. On top of that, isolated targets take additional damage from Taste Their Fear.

If Evolved Reaper Claws hit isolated enemy units, its cooldown will be reduced by 45%.

Void Spike: When activated, Kha’zix will fire a cluster of spikes in a straight line toward that target location, detonating upon hitting enemy units. It inflicts physical damage to enemies within the area.

Kha’zix can heal himself when he’s in the explosion radius.

Evolved Spike Racks: Kha’zix will fire three clusters, slowing enemy champions by 60% and revealing them for a few seconds.

Remember that multiple explosions don’t inflict additional damage to the same enemy nor provide the champion with healing.

When activated, Kha’zix will leap into the target location, inflicting physical damage to surrounding enemies upon making contact.

You can use Taste Their Fear during Leap.

Passive: All ranks in Void Assault enable Kha’zix to evolve his ability, providing additional effect and making it stronger.

Picking an ability to upgrade or evolve initiates a 2-second cast time, during which Kha’zix advances his form—completing the evolution after the duration.

Active: When Void Assault is in effect, Kha’zix becomes invisible for 1.25 seconds, allowing him to gain 40% bonus movement speed while in stealth mode.

After leaving his invisibility state in 2 seconds and for the next 10 seconds, you can cast Void Assault a second time at no additional costs.

When you recast Void Assault, Kha’zix will mimic the initial cast’s effects.

You can cast this skill up to three times.

Kha’zix is one of the most popular Jungle picks in League of Legends – Read More, coming with him as a satisfying yet challenging champion to play. Mastering the Voidrevear’s tricks will keep you ahead in the game.

Here are a few tips and tricks to help you master Kha’zix’s tricky gameplay: