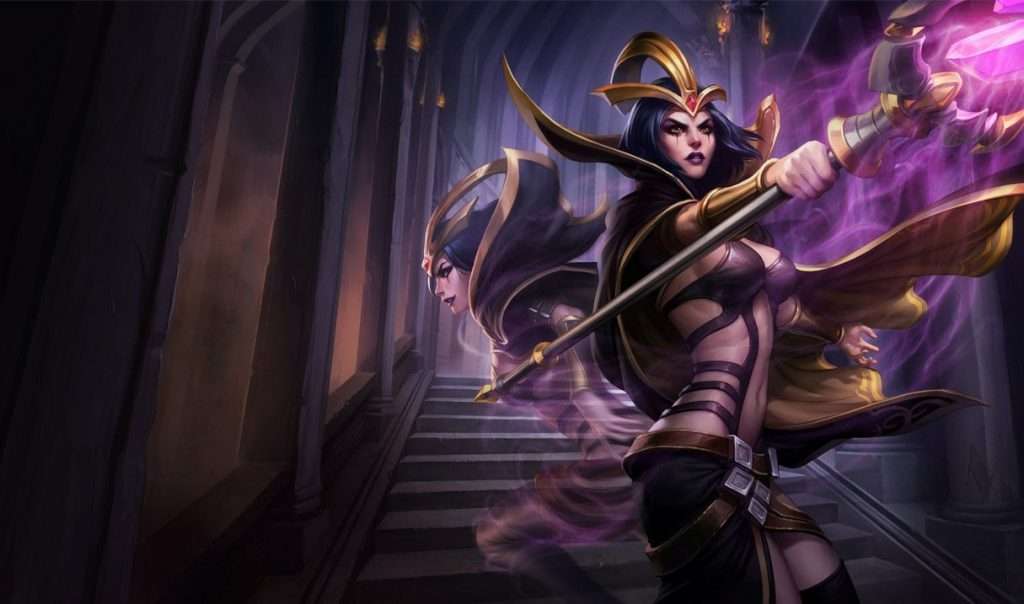 Leblanc, the Deceiver, is known to be the mysterious pale woman who has manipulated numerous individuals and events since Noxus’s earliest days. Even to the Black Rose cabal members she’s a part of, Leblanc is simply a mystery.

Leblanc uses her magic to mirror herself, allowing herself to appear to anyone, anywhere—at any time.

She’s always plotting just out of sight, making her true motives as mysterious as her shifting abilities.

Deep within the dungeons of Noxus, meandering streets lie the real underbelly of the sprawling metropolis—serving as a haven for all manner of evil and hostility.

Amongst the secret societies that consider this labyrinth their home, LeBlanc, manages the Block Rose cabal, originating from a lost time in Noxian history.

Ruthless, LeBlanc and her faction were a mainstay in Noxian politics before the militarization of the Noxian government.

In those days, Leblanc’s guild of powerful magicians met in secret to progress their hidden agenda, honing a craft subtly.

While Leblanc and her clique’s exact motives have remained mysterious, many believed the Black Rose was the “true” power behind the throne of Noxus.

However, when martial prowess became the determination of Noxus, the Black Rose seemed to vanish overnight.

But years later, LeBlanc re-emerged at the gates of Noxus, making it clear that she and her cabal had simply been biding their time, waiting for a new authority to emerge in Noxus.

Leblanc is a powerful mid-lane competitor. However, she can be challenging to master.

Here’s a look at Leblanc’s skills and abilities:

Mirror Image: This passive skill allows Leblanc to create a controllable clone of herself when she’s damaged to 40% max health. After which, Leblanc and her clone instantly become invisible for one second.

Leblanc’s spawned clone can perform basic attacks but deals no damage. Her clone can last for eight seconds and begins running 1900 units toward a random place in front of the champion decided the moment the clone spawns.

Leblanc’s Mirror Image can only happen once every few seconds.

Sigil of Malice: When casting Sigil of Malice, Leblanc will project an orb to an enemy target, inflicting magic damage while marking enemy units for 3.5 seconds upon arrival.

Additionally, Leblanc’s Sigil of Malice allows her next damaging ability against marked targets who consumed the mark—dealing them the same damage again.

Distortion: Distortion lets Leblanc dash to a target location, inflicting magic damage to all nearby enemy units upon arrival, leaving a return pad at the cast location for 4 seconds.

You can recast Distortion after 0,2 seconds of Leblanc’s dash ending.

When you recast Distortion, Leblanc will blank to its return pad no matter the range.

Ethereal Chains: When casting Ethereal Chains, Leblanc will fling an illusory chain in a target direction, latching onto the first enemy unit it hits. It will then inflict magic damage while forming a tether between Leblanc and the enemy unit for 1.5 seconds, during which the target also gets revealed.

If the tether doesn’t get broken by the set duration, the target will receive bonus magic damage, will also be revealed and rooted for 1.5 seconds.

Mimic: When activated, Leblanc can cast a mimicked version of her recently used abilities, applying similar effects. However, it inflicts modified magic damage.

Mimic Sigil of Malice: This will inflict modified damage and double damage to enemy units when triggering the mark.

Leblanc boasts an aggressive appearance, allowing her to dominate mid-lane. However, she’s a challenging champion to master.

Once you’ve mastered Leblanc’s unique gameplay, you can easily carry your team to victory.

Here are a few tips and tricks to help you master Leblanc’s playstyle in no time: (Read about LOL Buff)

Read about EVELYNN next!